St. John of Damascus, who lived during the age of the first great Islamic onslaught against the Catholic world, wrote in On Heresies that Muhammad “after having chanced upon the Old and New Testaments and likewise, it seems, having conversed with an Arian monk, devised his own heresy.”  This was the first pronouncement from a Catholic source, the last of the Fathers of the Church no less, that Islam might not be as new (Muslim claims to be the primordial religion of mankind not withstanding) or nearly as original idea as it first seemed.  Unfortunately this was also the last of these pronouncements until Hilaire Belloc repeated it our own day just before the Second World War, and it has been dutifully ignored ever since.

So let us examine St. John Damascene’s claim.  The root and core of Islam is the denial of the Trinity which must of course be followed by a denial of the Incarnation.  But the denial of the Trinity was not new in the seventh century.  It was an ancient error by the time of Muhammad.  The heresies that plagued the Church in the age of the Roman Empire all denied the essential unity between God and man that the conjoined natures of Jesus Christ represented and which is only possible to comprehend through the Trinitarian revelations of the New Testament.  So, what does this have to do with Islam?

On the northeast corner of the inside octagonal rim of the Dome of the Rock in Jerusalem, the oldest extant Islamic building in the world is written this curious inscription from the Qur’an:

The Messiah, Jesus, son of Mary, is only a messenger of Allah and His word which He communicated to Mary and a mercy from Him.  So believe in Allah and His messengers.  And say not, Three.  Desist, it is better for you.  Allah is only one God.  Far be it from His glory to have a son (Qur’an 4: 171).

So then, they ancient charge of the Sanhedrin is leveled at the Church: Jesus is not God, there is no Incarnation; God is one so do not proclaim the Trinity to the world.  This charged migrated out from Jewish circles already by the close of the Apostolic Age.  The Gnostics and various others by the close of the first century were already echoing this line of thinking.  They would mostly say that our Lord was pure spirit, that his body was more or less and optical illusion, and of course that he did not form this link between God and man who can only be understood through the doctrines of the Trinity and the Incarnation.  Later, when the first flush of Gnosticism had run its course the world saw the dawn of Arianism.  Arius, in the early fourth century just following the Edict of Milan, proclaimed our Lord to be a kind of demi-god, and that there was an incarnation of sorts, but not really the Incarnation.  Basically he proclaimed that Jesus Christ was the most powerful created being in the universe, that He was almost God, but that He was not God, that He was created in time.  This doctrine would go on to be adopted by a great swathe of the political elite (including many bishops) in the Empire and later by a number of the barbarian tribes who were coming into what had been the Western Empire and cause a whole host of problems for the Church and for the Roman world.  Many today are confused when they hear or read of the Arian controversy; in our functionally Godless age men scoff at the idea of arguing over the nature of Jesus Christ.  But the problem then is the same is the problem now, though I must say that in that age the Church attacked the issue much more forcefully that it is doing today: if we deny the linking of the divine and human nature in Jesus Christ then we cannot live out the Gospel as it has been revealed to us.  How is a believer supposed to “be perfect as your heavenly Father is perfect (Mt. 5: 48)” if we have no link to the Father in Jesus Christ?  This has been the dagger that all heresy, coming in a multitude of guises over the ages, has aimed at the heart of the Church since the beginning. 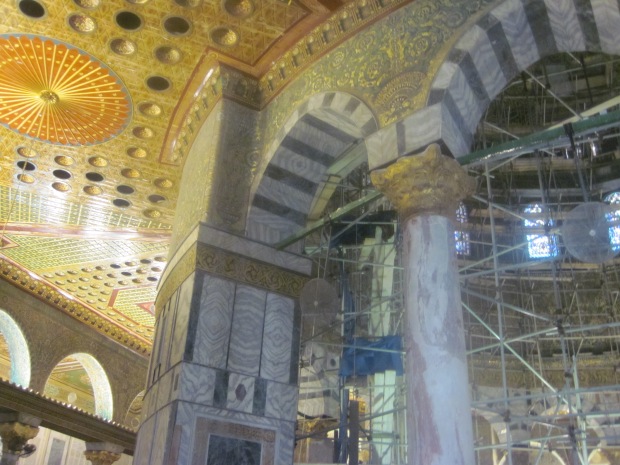 So then this anti-Trinitarian line from the Qur’an is inscribed upon the oldest still standing Islamic building in the world, a monument whose construction was begun a bare six decades after Muhammad’s death.  This curious anti-Trinitarianism in what was supposedly a newly revealed text was a feature that Islam wanted to parade before the world from its earliest ages.  It features prominently throughout the Qur’an in fact.  And the Qur’an is the direct revelation from Allah to Muhammad through an angel who called himself Gabriel, or so the Muslims say.  But these anti-Trinitarian ideas were not new in the seventh century.  They were in fact quite old by that time, and they sprang not from divine but very human sources going back to the Gnostics of the late first century and even earlier to the Jewish opponents of the nascent Catholic Church, half a millennium before Muhammad was even born.

We have lost many of the writings of the anti-Trinitarian heretics who thrived in the late Roman Empire as they were anathematized by the Church and ultimately destroyed after these heresies were extinguished so there is not too much left to make a comparison with.  There are no records left of Arian liturgies, for example, though they were sung out for three centuries between the Council of Nicaea and the Merovingian rule of Gaul.  There is however a very curious echo between the very early heretical Infancy ‘Gospel’ of Thomas that is dated to the second century AD and a claim made in the Qur’an.  First from the heretical infancy narrative (http://gnosis.org/library/inftoma.htm ):

1 This little child Jesus when he was five years old was playing at the ford of a brook: and he gathered together the waters that flowed there into pools, and made them straightway clean, and commanded them by his word alone. 2 And having made soft clay, he fashioned thereof twelve sparrows. And it was the Sabbath when he did these things (or made them). And there were also many other little children playing with him.

3 And a certain Jew when he saw what Jesus did, playing upon the Sabbath day, departed straightway and told his father Joseph: Lo, thy child is at the brook, and he hath taken clay and fashioned twelve little birds, and hath polluted the Sabbath day. 4 And Joseph came to the place and saw: and cried out to him, saying: Wherefore doest thou these things on the Sabbath, which it is not lawful to do? But Jesus clapped his hands together and cried out to the sparrows and said to them: Go! and the sparrows took their flight and went away chirping. 5 And when the Jews saw it they were amazed, and departed and told their chief men that which they had seen Jesus do.

Now from the Qur’an:

A fascinating verse from the Qur’an on so many levels! First there is the odd mention of the Holy Spirit (روح القدس), odd for an anti-Trinitarian belief system such as Islam, and not unique to this verse alone.  Perhaps the angel who called himself Gabriel just could not help himself for whatever reason, but I will leave that be.  Our Lord’s miracles are placed firmly in the camp of those of the Oriental wonder-worker who has existed since time immemorial.  The Church has always taught that these miracles were an outward sign of who Jesus Christ is but in Islam Jesus Christ is reduced, as he would certainly have been in Arianism if it had ever gained a permanent foothold, to a mere messenger of God.  Another in the long line of prophets, a man who is to be revered but certainly neither Savior nor Redeemer.  Not the one who was sent by God to save mankind from its distress, and certainly not anyone who would create the link between God and man and fulfill mankind’s destiny; we who were created in the “image and likeness (Gn. 1: 26)” of God.  I have to mention here as well the sly little bit inserted by the angel who called himself Gabriel into this verse about our Lord speaking to people in his “old age”.  Jesus  Christ was crucified, died, rose from the dead, and ascended to heaven during a 53 day period when he was 33 years old, not regarded as ‘old age’ even during the seventh century.  Just another of the Qur’an denials of the founding fact of the Catholic Church: that Jesus Christ really did suffer, die, get buried, rise from the dead, and ascend to the Father to make intercession for the Church until He returns as Judge of that world at the end of time.  In another section of the Qur’an (4:157) a rather vaguely worded assertion was made that Jesus was not crucified at all, that another went in his place; this is a claim that also has roots that predate the Qur’an by centuries and is in fact found in many of the Gnostic ‘gospels’ that were recovered  at Nag Hammadi in 1945.  But I am getting far afield of what I wanted to talk about: the birds.  Let’s get back to the birds.

All of the other parts of this verse, save the bit about our Lord’s old age, could have been gleaned from the canonical Gospels.  They all record how our Lord healed both the blind and the lepers and how the Spirit was seen (though He had always been there) to have come down upon Him at his Baptism and how his Mother had conceived Him by the Holy Spirit.  But not the birds.  The ‘miracle’ of the birds reduce our Lord to a wonder-worker.  One could I suppose make the argument that our Lord came to give Life to the world and this is true, but our Lord came to breathe Life into men, not birds.  In Genesis man is the only creature into whom God breathes his Life.  The ‘miracle’ of the birds does not fit into that pattern our Lord established in the canonical Gospels.  The evidence shows that it comes from heretical Christian sources that predate the Qur’an by possibly half a millennium and was probably concocted to reduce our Lord to a nothing more than a wonder-worker.  Or who knows?  Maybe the angel who called himself Gabriel spoke this tale to others long before he spoke it to Muhammad?

From this long post I think that we can all agree that there is a mountain of evidence that many features of and ideas expressed in the Qur’an predate the life of Muhammad by a very long time.  Was St. John of Damascus correct in supposing that Muhammad had an Arian monk for a teacher?  We will probably never know.  He probably didn’t need one though that story about Muhammad’s childhood encounter with a monk outside of Damascus that was recounted in the last post does raise an eyebrow.  In any case. the Damascene saint did recognize heretical Christianity when he saw it and he placed Islam firmly in that camp.

So after all that let us just say: