December 11 is the Feast Day in the Latin Rite of the Catholic Church of Saint Damasus I who was pope from 366 until his death on December 11, 384.  Though he reigned some three centuries before the assault of Islam on the Christian world his work was instrumental in establishing the institutions that would preserve the Church in Europe during the long centuries that followed the Muslim armies’ splitting the Mediterranean in two.

Firstly it is to Saint Damasus that we owe the Vulgate, as much as to Saint Jerome, for it was Damasus who inspired Jerome to undertake this task.  It is hard to imagine how the Western Church would have survived its separation from the East and from the lands of Christ’s birth and earthly activity by the advance of Islam.  It was Jerome’s unified translation of the Old and New Testaments done at a time when the Greek of the New Testament was still a living language in the East and when the Western Church still had access to ancient biblical texts in both Hebrew and Greek that disappeared in the anarchy of the succeeding centuries.  This unified and authoritative translation would sustain the Church in the West for the next 1200 years and for 900 of those years after the rise of Islam until the chaos of the Protestant Revolt arose in the 16th century. 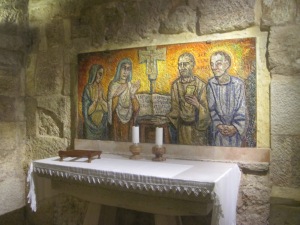 Modern altar in the cell of Saint Jerome underneath the Church of the Nativity in Bethlehem. Saint Jerome did much of his work on the Vulgate here under the patronage of Pope Saint Damasus I, to whom he dedicated the work. (taken by me August 3, 2011) 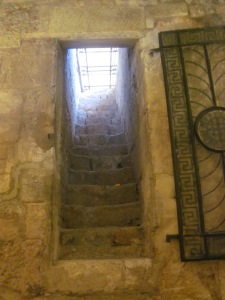 Ancient stairs leading up from Saint Jerome’s cell under the Church of the Nativity in Bethlehem. It was here that Jerome did much of his work on the Vulgate under the patronage of Pope Saint Damasus I, to whom he dedicated the work. (taken by me August 3, 2011)

Damasus was also a great defender of the primacy of the Apostolic See in Rome.  He rightly attached the Biblical foundation of the See of Saint Peter to the words of Jesus Christ in Matthew chapter 16.  He thus firmly and publicly proclaimed the primacy of the Roman Church as permanent and not linked to any decision of a Church Council as the Roman Empire in the West was beginning to collapse, and linked this both to its past and to the future.  This served the Church and Christian civilization well during the long and chaotic centuries after the decline of Roman power and the rise of Islam which shattered the ancient unity of the Christian and the Mediterranean world.